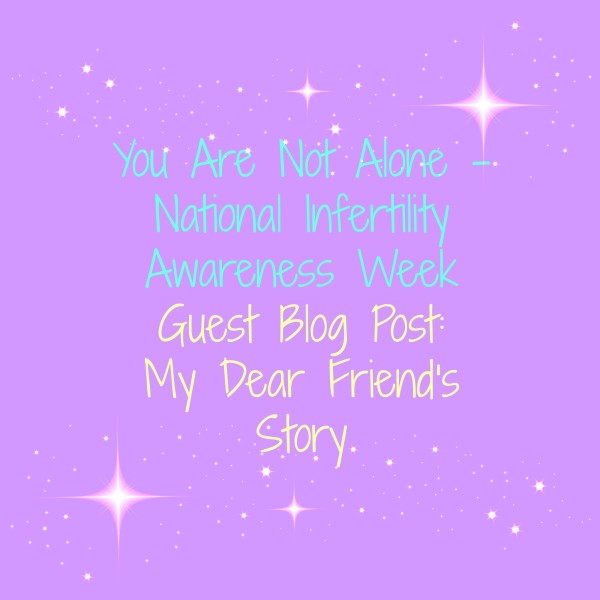 A dear friend of mine who wishes to remain anonymous, is the next guest blog post for my infertility series, You Are Not Alone – National Infertility Awareness Week.

Ya’ll…this story is raw. And real. And unfortunately, it is what a lot of women suffer through in silence. My wish and hope is that someone who has gone through this or is currently, feels comfort that they are not alone… Thank you my dear friend, for being so authentically honest and truth telling in your story and willing to share such painful experience to help others.

My friend’s story in her own words:

My husband and I began trying to get pregnant. I remember once we decided to try, I was hoping it would happen immediately. Of course, doctors and friends said it could take up to a year to get pregnant once I stopped the pill. I had been off the pill for just a few months when we began actively trying. I remember feeling a little disappointed when my first cycle came and I wasn’t pregnant. I know how women must feel waiting and trying. It was agony for me. I remember my husband telling me to be patient, and I could not believe how he could say that. It’s like once you make that big decision, you want to become a mom as soon as possible.

I believe it was my second or third cycle and I took a pregnancy test and it was positive. Then I took another and another. I was so excited. I called my doctor and went in for a test. Because it was most likely too early, she confirmed the pregnancy with another pee test. I was ecstatic. I was so happy. However, there was this strange looming fear present. I have heard now from other women that they sometimes experience the same thing. I remember making some comments here and there to my husband about not telling people in case something bad happened. I just seemed very nervous. I had my first vaginal ultrasound and the doctor at the time confirmed it appeared I was about 5 weeks along. My next ultrasound wouldn’t be for quite a while. At the time all of my levels seemed normal too. My husband was so excited, even though we had discussed waiting to tell people until I was in my second trimester, he told some family members. Their excitement was great and we decided to end up telling everyone at our church too.

Unfortunately, just a few weeks later, while I was working at home, I began spotting. I googled all over and there were many women who experienced some spotting…even full periods during pregnancy and experienced no other problems. I went to the ER with a friend of mine because my husband was gone at the time. They did another vaginal ultrasound and the doctors assured me everything looked “normal” but that there was always a risk of miscarriage when bleeding occurred. Over the next couple of days, I continued light bleeding off and on and then one day, as I was working from home, I began to get the worst cramps I have ever had in my life…and I’ve had very severe menstrual cramps. The cramps never stopped. They got so bad I couldn’t walk. I literally thought I was dying. I remember feeling sick like I was going to throw up, feeling like I was going to have the worst bowel movement of my life and feeling like I was going into labor. I knew immediately what was happening. Call it women’s intuition, but there was no doubt in my mind that I was losing my first baby.  My husband had come home during this time and was there seeing how much blood I was losing and how white I had become. He got so frightened at one point that he called our friend who works in the medical field to see what she thought we should do. She advised him to take me to the hospital. At that time, I was not ready to go anywhere though. There is no way I was going to sit in a car and ride to the hospital like this. What transpired in the next hour or two was sheer agony.

Now that I can look back on it and I have spoken to others that this happened to, I can tell you this. I had a baby in my bathroom. My body eliminated that precious little baby that I had prayed for. It was horrific. It was bloody. It was the worst experience of my entire life. Period. I wish it on nobody else. It scarred me for life. I still have traumatic feelings about it sometimes and nightmares too. I will spare you the minute details, but it was awful. Once my body passed everything, I continued to have awful cramps for days. My husband ended up taking me to the hospital and they did some blood tests, pee tests, and vaginal ultrasound. They also hooked me up to an IV and gave me some fluids as well. They determined that my body had fully eliminated everything and that a DNC was not needed. I was devastated, but for some odd reason (it could have been shock), I couldn’t cry anymore. I had done all that earlier in my home. I was very matter of fact about everything and was not able to feel emotions about it. My husband made the phone calls to our family members and our friends to tell them I had lost the baby. I am sure that was difficult for him, but he handled it ok.

Unfortunately, it was later that my husband and I started being on separate pages. I was depressed and just felt awful (remember, I continued bleeding and cramping very badly for days after the even). My husband was able to move on very quickly and it seemed effortless to me. I took that as he didn’t care. He told me to basically “suck it up” and move on. I don’t think he fully understood what I had gone through mentally and physically. It hurt me very deeply the things he said during his grief. In fact, I still remember how those words felt and the pain I felt in hearing them. I don’t think I will ever forget. Looking back on it, I just don’t think he had any clue how to deal with it. Of course, neither did I. All I wanted to do was to talk about it. Thank goodness I had a friend from work who had recently gone through the same thing. She was more than willing to talk to me about it and I will always be grateful for that. I am sure it was painful for her to speak about it, but in doing so, it helped me heal. The best thing that happened to me after my miscarriage was getting pregnant again. My doctor said not to have sex for a little while after the miscarriage (I didn’t want to anyway).

However, once some time had passed, my periods were still erratic for a bit. I ended up a few months later pregnant for the second time. I was lucky. I know some women who never get pregnant. I know some women who have multiple miscarriages. I am lucky that I didn’t have to go through that again. My second pregnancy went very well. My baby was born perfectly healthy, but I can still say that during the pregnancy I was worried and scared that it would happen again. I just had to take it day by day. My faith got me through the situation and I now have a very healthy and happy child that I wouldn’t trade for the world.

I pray that all women will begin talking about their experiences with miscarriage, infertility and child-loss. I feel that these subjects have been taboo in our society for far too long. It happens so frequently that almost every woman will experience or know someone that has experienced one of these terrible issues. I hope that women begin to feel more open about sharing their experiences with one another so that the women who do go through these things know what to expect and feel a comfort in knowing they are not alone.

One of the reasons I decided to write about my own infertility experiences and share my friends’ stories as well, is because I’ve found a lot of comfort from reading other online posts from women going through the same struggles. If you ever want to chat with me on a more personal level, I’d love to connect over on Facebook or Instagram! Follow me on Facebook at We’re the Joneses and @werethejoneses on Instagram

This site uses Akismet to reduce spam. Learn how your comment data is processed.